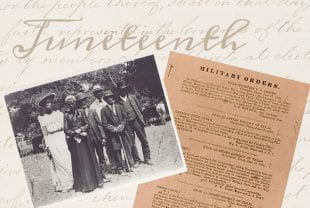 A new annual lecture series from Rice will commemorate Juneteenth with discussions on the legacy of slavery and race in America.

“Reflections on Juneteenth and America’s Racial Legacy Lectures” will be hosted live online June 19 and will include 20-minute lectures from Rice professors and an hourlong conversation with former Army Capt. Paul J. Matthews, the founder and chairman of the Buffalo Soldiers National Museum.

“Juneteenth as a moment in African American history does not get nearly the attention that it deserves,” said Rice Provost Reginald DesRoches. “So I believe there is still a great deal of education that needs to be done around the history of slavery and how its legacy plays out to this day.”

The daylong program beginning with a 10 a.m introduction by DesRoches will feature eight lectures from experts across the university and conclude at 4 p.m. DesRoches shared a link to the Zoom meeting and the password to join in a June 16 email sent to the Rice community.

“The initial response that I am hearing from the Rice community about the Juneteenth event has been outstanding,” DesRoches said. “I believe this is a reflection of the recent events, but also the interest in our community to come together to learn about the past, and work towards ways to build a more inclusive environment at Rice.”

Among six additional lectures, sociology professor Jenifer Bratter, the director of the Program for the Study of Ethnicity, Race and Culture at Rice’s Kinder Institute for Urban Research, will discuss “Reflecting on the Lessons of Juneteenth: Racial (In)Justice and the Role of Place,” and Pulitzer Prize-winning history professor Caleb McDaniel will speak on “Slavery Before and After Juneteenth.”

At 1 p.m., Associate Provost Roland B. Smith Jr. will moderate a talk with Matthews, whose Buffalo Soldiers National Museum in Houston’s Museum District is dedicated to preserving the legacy and honor of African American soldiers in the U.S. military from the Revolutionary War to today.

Juneteenth, which is celebrated across the U.S., has its roots in Texas. The holiday recognizes the day in 1865 when the news that enslaved peoples had been freed by the Emancipation Proclamation reached Galveston — 2 1/2 years after President Abraham Lincoln’s decree.

The oldest park in Houston, Emancipation Park, was purchased by Jack Yates, Richard Allen, Richard Brock and Elias Dibble in 1872 to commemorate the end of slavery and provide a place for their Third Ward community’s annual Juneteenth celebrations. Such yearly events flourished across Texas until the Great Depression, but were revived by the civil rights movement and soon spread across the nation.

Rice offices across the university came together to create the series, including the Office of Diversity and Inclusion; the Office of Multicultural Affairs; the Center for African and African American Studies; and the Task Force on Slavery, Segregation and Racial Injustice.

Additional lectures during the June 19 series will offer insight into race and schools, race and criminal justice, media coverage of protests, racial bias and the Second Amendment, and how individuals and organizations can reduce racism.

“Commemorating Juneteenth through a series of lectures is great way to bring our community together around the important issues of race and justice,” DesRoches said. “It has never been more important than today as we grapple with issues of racial injustice.”