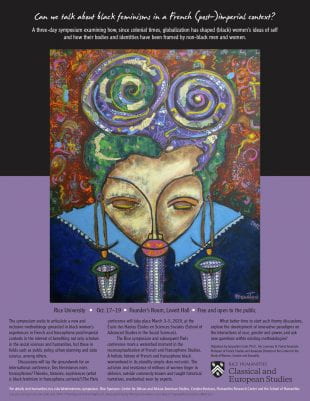 Humanities will host scholars from U.S. and France to examine how globalization has shaped black women’s idea of self

How do black women in Francophone nations such as Haiti or Cameroon identify with those in France? If women in countries like Senegal are performing feminist work while resisting the description of feminism, which is often seen as a white or Western concept, does a feminist label still apply? What does it mean to be a black woman versus a woman of African descent, and how do broad concepts like geography and history affect that determination?

“Can We Talk About Black Feminisms in a French (Post-)imperial Context?” will take place Oct. 17-19 in Lovett Hall’s Founders Room. It is free and open to the public.

“That’s why we’re having a conference,” said Jacqueline Couti, the Laurence H. Favrot Associate Professor of French Studies in the Classical and European Studies department, who’s organizing a three-day international symposium to address these topics and more.

“Can We Talk About Black Feminisms in a French (Post-)imperial Context?” will take place Oct. 17-19 in Lovett Hall’s Founders Room. Couti has invited scholars from the United States and France to examine how globalization has shaped black women’s idea of self and how their bodies and identities have been framed by non-black men and women alike.

The conference is free and open to the public. Couti stressed the importance of its openness and accessibility, as bringing various points of view to the symposium is vital.

The symposium comes ahead of a larger conference Couti is organizing, which will take place March 3-5, 2020, in Paris at one of the country’s leading research centers. In preparation, Couti has asked many of those same scholars to convene at Rice to work on the spring conference and present their original, cutting-edge research.

“I thought it would be great to have people come here first so that Rice could be a think-tank space,” Couti said. “When I talk to my friends from big research schools in France, they know Rice for sciences, but they don’t know Rice for humanities.”

Administrative work on the Paris conference will take place in the mornings on Thursday and Friday during the Rice symposium, while roundtable and panel sessions, which are open to the public, will take up the afternoons and most of Saturday. A screening of the documentary “Mariannes Noires,” which examines the lives of seven Afro-French women unraveling what it means to be a multicultural French citizen in the 21st century, will conclude the conference Saturday afternoon.

Couti recognizes that the topics covered by the symposium can be difficult and uncomfortable to discuss, but this only makes them more important. Addressing these issues, she said, helps us better understand others as well as ourselves. And this, Couti said, is key to collaborating, to diminishing tension and discord between groups that can only see differences, to reducing war and violence against others.

“For me, this is to show that the humanities are really about changing the world,” she said. “It’s great to invent a rocket and it’s great to find a cure for AIDS, but helping people to understand other people and to be nicer to other people, that’s great too — and this is part of what allows rockets to be built and diseases to be cured.

“We now know that the U.S. could never have landed live humans on the moon and brought them back without the help of some super smart black women,” Couti said. “But someone had to be in a position to recognize their intelligence, no matter how little recognition they got in the end. And they had to live in a society that valued educating them. The humanities have value in and of themselves, but they also make possible a lot of the other undertakings that we value.”

“Can We Talk About Black Feminisms in a French (Post-)imperial Context?”, Oct. 17-19, Founders Room, Lovett Hall, free and open to the public. This symposium is sponsored by the School of Humanities, the Humanities Research Center, the Office of Research at Rice’s Creative Venture Fund and the Center for African and African American Studies.