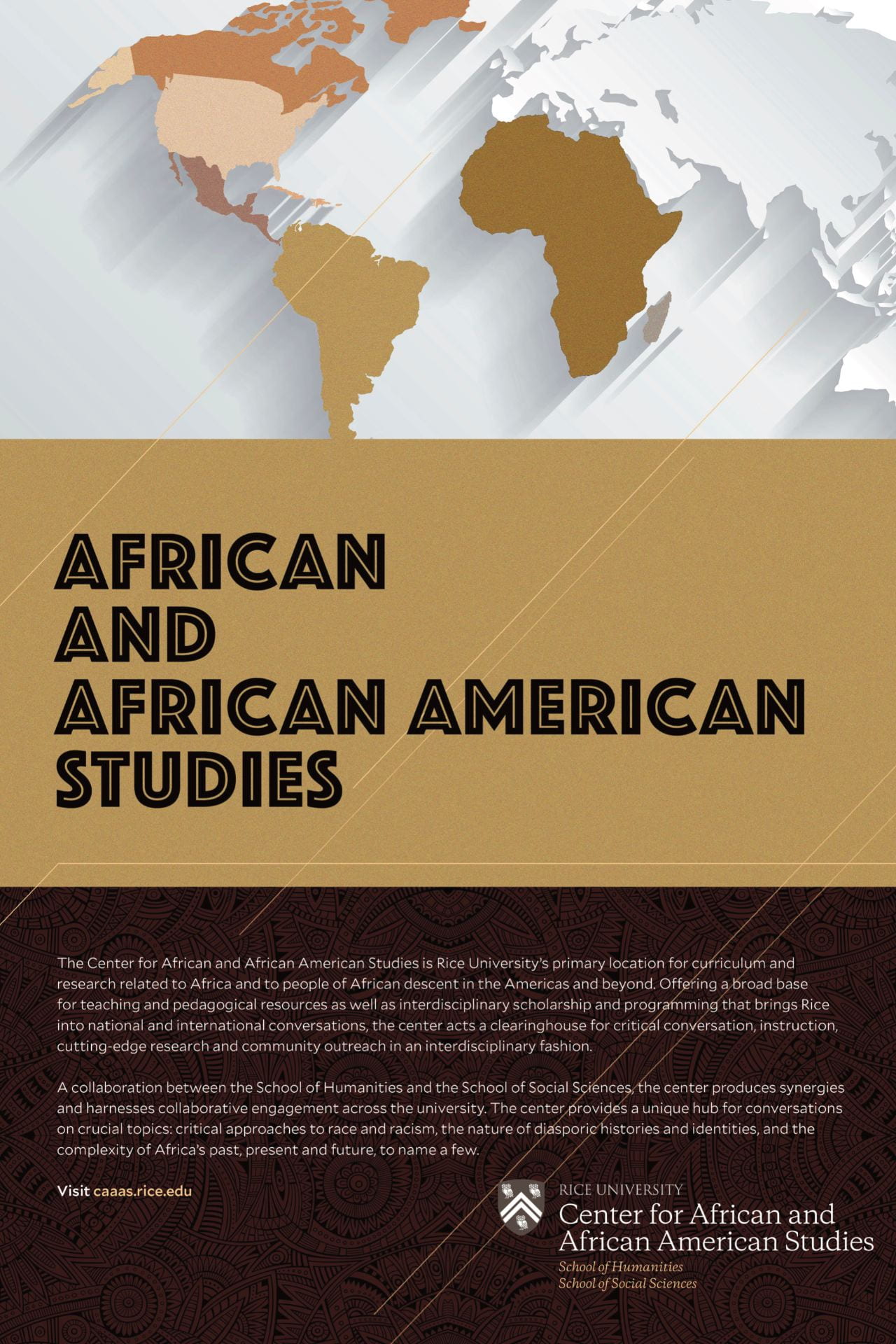 CAAAS will provide unique hub for conversations about race, identity and more

In response to increasing interest on campus and growth in the number of faculty members with interests in African and African American Studies, Rice University has announced the creation of a robust new center focused on the topic.

The Center for African and African American Studies (CAAAS) will be introduced Oct. 16 with a reception in the Humanities courtyard from 5:30-7:30 p.m.

The Center for African and African American Studies (CAAAS) will be introduced Oct. 16 with a reception in the Humanities courtyard from 5:30-7:30 p.m. Light bites and music performed by Shepherd School of Music students will help celebrate the occasion.

Jointly housed within the Schools of Humanities and Social Sciences, CAAAS will provide a unique hub for conversations on crucial topics such as critical approaches to race and racism, the nature of diasporic histories and identities, and the complexity of Africa’s past, present and future. Anthony Pinn, the Agnes Cullen Arnold Professor of Humanities and professor of religion, will serve as its founding director.

The center, which draws in part on the efforts of former provost Marie Lynn Miranda, is the result of years of teamwork between the schools of Humanities and Social Sciences, which prepared the path by developing faculty positions and concentrating key resources in these areas.

“The collaboration between the two schools has been essential to getting the center off to a solid start,” said Kathleen Canning, dean of Humanities and the Andrew W. Mellon Professor of History.

“That said, the work and consequence of African and African American Studies goes well beyond our two schools, and I look forward very much to how other faculties in Engineering, Architecture, Natural Sciences, Music, the Glasscock School (of Continuing Studies) and the Jones School draw on, contribute to and shape the work of the center moving forward.”

CAAAS will draw on the work of some 15 current faculty, with plans to hire more in the coming years, Canning said, making it an “important intellectual home for some of Rice’s most outstanding researchers, a number of its most committed university citizens and a range of dedicated teachers.”

Creating such a hub is crucial to such a multifaceted discipline as African and African American Studies, said Susan McIntosh, interim dean of Social Sciences.

“Our understandings about the complexity and richness of African and African American experiences draw not only on history, religion, literature and the arts but also on the social institutions, politics and culturally mediated perceptions that shape peoples’ lived experiences,” she said.

Ten years ago, McIntosh said, the small number of faculty with Africa-based research interests was a challenge to maintaining Rice’s original African Studies minor. With a solid base of support across campus and plans for expansion underway, she sees a bright future for the center.

“This commitment to growing African and African American Studies over time is especially exciting,” McIntosh said.

In its first year, CAAAS will focus on expanding the current African Studies minor into a minor in African and African American Studies with two possible tracks and courses across the departments of Anthropology, English, History, Religion, Sociology and Political Science. Center director Pinn and his team are also developing an introductory course that will anchor the new minor.

Anthony Pinn, the Agnes Cullen Arnold Professor of Humanities and professor of religion, will serve as the founding director of CAAAS. (Photo by Tommy LaVergne)

“Within this one course, students will get a sense of how these two longstanding intellectual enterprises developed, the kinds of questions they ask, the kinds of methods they make use of and the kinds of theories that ground them,” Pinn said.

The center is already co-sponsoring its first conference this week: an international symposium on black feminism led by Jacqueline Couti, the Laurence H. Favrot Associate Professor of French Studies in the Classical and European Studies department. Finding new faculty has also begun in earnest.

“We’ll start the searches for the first two this year, so we’re hitting the ground running,” Pinn said.

Like Canning, Pinn is enthusiastic about the unique opportunities afforded by Rice’s small size and Houston’s vast sprawl. The unconventional nature of Rice, he said, will allow CAAAS to tackle African and African American studies in its own transdisciplinary tradition.

“And if you take into consideration where we are, this city is cosmopolitan and diverse like no other,” he said. “There is a wealth of knowledge in Houston that ought to contribute to a Rice education. Houston has a lot to teach us and the center will be one of those ways in which we’ll open up the lines of communication.”